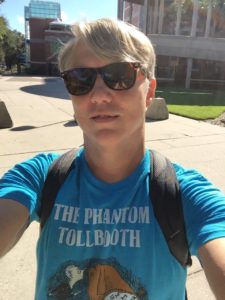 I earned my PhD from the University of Texas at Austin and have been with UF-English since 1998, after four years at Eastern Michigan University.  I trained as an Americanist but specialize in Anglophone children’s literature, with an interest in queer studies and theory studies. I’ve published three monographs and coedited four essay collections with a fifth in development (for more on research and publication, go here). I value professional service and have served as a project evaluator for the Research Foundation in Flanders, the Doctoral Fellowship Programme of the Austrian Academy of Sciences, the German-Israeli Foundation for Scientific Research and Development, the SSHRC, the Andrew W. Mellon Foundation, and the Junior Research Fellowship Program at Cambridge University, UK. I sit on various editorial boards and have been especially active with the Children’s Literature Association. From 2004-2013 I was an Associate Editor for the Children’s Literature Association Quarterly. With Kate Capshaw I am coeditor of the third volume of the Cambridge History of Children’s Literature, now in preparation, and with Elizabeth Marshall I coedit the Children’s Literature and Culture series at Routledge, the oldest-running monograph series in the field, founded by Jack Zipes. For English, I’ve served as Graduate Coordinator and Department Chair, and am now Associate Chair and Undergraduate Coordinator. I am also an Affiliate Professor of the Center for Gender, Sexualities, and Women’s Studies Research and Associate Director of UF’s Center for Children’s Literature & Culture. As part of the Baldwin Editorial Collective I also worked on a book featuring our Baldwin Library of Historical Children’s Literature entitled B is for Baldwin: An Alphabet Tour of the Baldwin Library of Historical Children’s Literature, available from the University Press of Florida. I teach undergraduate courses in children’s and young adult literature as well as graduate seminars such as “Into the Archive,” “Comparative Children’s Literature” and “Disney and Its Discontents.”